An Overview of Benign Prostatic Hyperplasia (BPH) or Enlarged Prostate

An Overview of Benign Prostatic Hyperplasia (BPH) or Enlarged Prostate 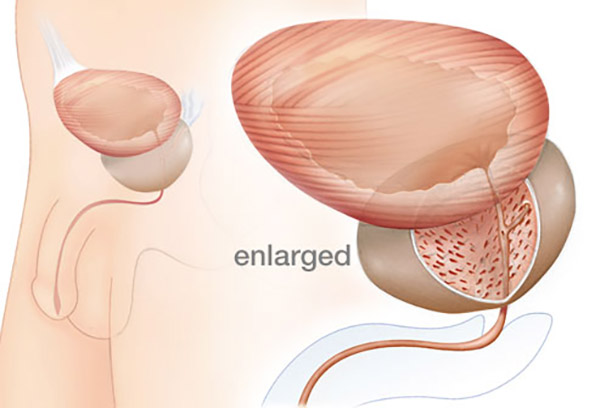 Benign prostatic hyperplasia – also known as benign prostatic hypertrophy or abbreviated as BPH – is a gradual enlargement of the central portion of the prostate resulting in compression of the urethra and an obstruction to the flow of urine. It is sometimes simply referred to as an enlarged prostate.

Enlargement of the prostate is common in most men as they get older, and although it is benign (meaning non-cancerous), it can be quite troublesome, causing all sorts of issues with urination.

What Is The Prostate?

The prostate gland is a part of the male reproductive system. Its main role is to produce the fluid that carries and protects sperm. It is located in the lower abdomen in men only.

The prostate surrounds the upper part of the urethra, the thin tube that carries urine from the bladder to the penis. It also carries semen from the prostate and sperm from the testicles to penis during ejaculation.

As men get older the prostate can enlarge, which can restrict the flow of urine to the urethra. This will lead to poor flow or the inability to completely void the bladder of urine. It may also increase the frequency and urgency of urination – this can be particularly uncomfortable at night where multiple trips to the bathroom may be needed. There are two main growth stages of the prostate. The first occurs during puberty, when the prostate roughly doubles in size. The second stage begins around 25 and continues for the rest of a man’s life.

BPH rarely shows any symptoms in men younger than 40. Symptoms become more prevalent as men get older and are seen in 90% of men in their seventies and eighties.

• Frequent or sudden urges to urinate

• Pain or discomfort during urination

• Drops of urine after urination

• Sensation that the bladder isn’t fully emptied after urination

Other symptoms include blood in the urine and pain in the perineum – the area between the anus and scrotum.

Prostatectomy: Simple prostatectomy is when the enlarged prostate is removed by enucleating it from its capsule. The sphincter muscle and nerves remain intact. This is done when the prostate is too large to treat any other way. It can be done robotically.

Laser Treatment: Holmium laser enucleation of the prostate – otherwise more simply known as holmium laser prostate surgery or abbreviated as HoLEP – is a minimally invasive procedure to treat benign prostatic hyperplasia (BPH) – an enlarged prostate – which is common in older men and can restrict the flow of urine to the urethra.

While he is primarily a urological cancer surgeon, Dr Arianayagam also sees patients with more general urological problems such as BPH. He has an extensive expeirience in TURP and laser prostatectomy.

If you have any questions regarding BPH or prostate surgery, or would like to book an appointment, please feel free to contact Urology Specialist here. Everything You Need To Know About Cystoscopy

Here is an overview of cystoscopy, including why it is used, a rundown of the procedure, recovery process, and possible… Everything You Need To Know About Hysterectomy

Hysterectomy is a major surgical procedure to remove the uterus. Here is a look at the different types of hysterectomy,…